John K. Lane has 45 years of broad financial, operational, technical and international experiences with middle market and entrepreneurial companies, serving as board member, CEO, CFO and CRO. Have participated in virtually all facets of numerous companies in the areas of strategy, marketing, operations, accounting, contracts, tax, information systems, performance measurement, employee benefit and other incentive plans.

John has served as an operating and liquidating receiver, has provided extensive turnaround services and has acted as crisis management and financial advisor for debtors and creditors. The industries that he has worked with include distribution, agribusiness, trucking, retailing, franchising, restaurants, real estate, chemicals, professional services, venture capital, software and technology, medical products and the manufacture of a variety of industrial and consumer products. John has also served as damage expert for numerous litigation matters, directed fraud audits, negotiated joint ventures and the resolution of breaches of contract, and provided numerous business valuations including several in connection with contentious proceedings.

Some of John’s client engagements at Inglewood include:

Prior to Inglewood, John was the Managing Director of The Revere Group-Cleveland, an IT and business consulting firm. John was also a partner at Price Waterhouse, serving for nineteen years, where he provided negotiation strategies for a successful $275 million acquisition and actively participated in three IPO's, including OfficeMax' offering which was at that time the largest retail IPO. John also served in Price Waterhouse's Retail and Real Estate Specialty Practices.

John has a BBA degree from the University of Notre Dame, has earned the Certified Turnaround Professional (CTP) designation, is a CPA (non-practicing) and holds a Series 7 Securities License (inactive). John is a former Board Member and past President for the Northern Ohio Chapter of the Turnaround Management Association. He has served on and moderated numerous panels, authored articles and been quoted in the media on a number of business topics. He was also the subject of an article in The Journal of Corporate Renewal, the national publication of the Turnaround Management Association. 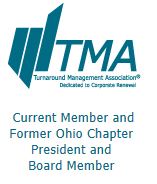